All Souls’ story begins with two separate congregations in Brattleboro, Vermont.  Each of them, one Universalist and one Unitarian, were, in turn, splinter groups that in the 1830s separated from orthodox Congregational congregations at two ends of the town. 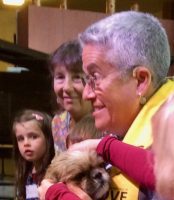 Cramped for parking space and stifled by outdated architecture hardly reflective of the expansive and progressive attitude of the UUs, the downtown buildings were sold. An all-purpose, light and airy modern structure was erected in a former sheep pasture two miles from the in-town site.  The All Souls congregation has occupied the new building, referred to as the West Village Meeting House, since 1970.

Though sited some distance from the center of town, All Souls has managed to stay involved in the life of Brattleboro.  For many years its building was home to the Brattleboro Jewish Community.  Early on, a pre-school occupied one floor of the religious education wing for a time and currently, Miss Martha’s Creative ELP occupies the ground floor of our west wing.  UUs welcome public forums, concerts, as well as religious activities like weddings, memorial services, Jewish celebrations, and interfaith meetings into the flexible space the building provides.  A theater group for challenged youth and adults,Theatre Adventure Inc., meets and performs here regularly.

All Souls Church has been recognized by the UUA as a Welcoming Congregation since 2001, and is also a Green Sanctuary certified by the UU Ministry for Earth in 2006.

The All Souls’ story is about a very old, small, liberal religious community nestled in the hills of southern Vermont where the mission is to be open and caring.