Our Minister and Staff

Rev. Telos Whitfield has been serving as a Unitarian Universalist minister since 2006. She began ministry at All Souls Church in 2020.

She received a Master of Divinity from Starr King School For the Ministry in Berkeley, California, when Rev. Rebecca Parker was President and head of the faculty.  She did her Chaplaincy residency at San Francisco General Hospital, offering support for patients and staff in the emergency room, oncology department and psychiatric units.

Rev. Telos was the Intern Minister at South Valley UU Society in Salt Lake City, UT, and then returned home to serve two congregations – the Walpole Unitarian Church and First Universalist Parish in Chester, VT for eight years. She has served the Universalist Society in Strafford for the past six years and is inspired to be serving All Souls U.U. Church in Brattleboro. She is also the store manager for two Good Buy thrift stores of Southeastern VT Community Action, her “ministry of  belongings!”

Rev. Telos has received the 14 Mindfulness Trainings from Buddhist monk and peace leader Thich Nhat Hanh, attending retreats he has led and offering workshops of her own in peace leadership and mindfulness. She has been involved in justice causes for most of her life, participating in a 300 mile peace walk for nuclear disarmament in 1987, and served as stage manager for the Earth Charter Celebration in Vermont on Sept. 9, 2001, where Jane Goodhall and Satish Kumar shared their wisdom. She has helped to organize vigils to end homelessness, support choice and freedom for women, LGBTQ people and people of color, and recently helped to organize a climate justice conference in Vermont. She has also been involved in the performing arts for many years, working as residency and project coordinator for the Flynn Center For the Arts, and was deeply inspired by dance choreographer Liz Lerman and jazz trumpeter Lester Bowie, artists who taught in our Vermont communities and worked with people of all ages and experience. She loves to dance, to discover the universal truths within sacred texts, poetry and true stories and voices of our elders and young ones. She learned to fold peace cranes from a nurse who served in Japan in World War II during an event hosted by the Walpole Unitarian Church, and has folded thousands of cranes to encourage peace and healing. 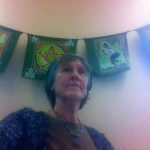 Beverly Miller
” M. Beverly Miller, along with her 2 children Nic and Sarah, were old time members  of All Souls Church  back in the late 1980s.  Beverly found herself back in the company of the good folks of this church as of  January, 2016 to serve as the Office Administrator.  It was, and remains, an especially safe and comforting place for her to land following the death of her son, Nic, in April of 2014. What brought her here as a member keeps her here now as a staff person, i.e., the warm and heartfelt supportive nature of the members of this congregation. Beverly will be completing her two year training in the Rowe Center Certificate Program in Interfaith Spiritual Guidance as of October this year and extends heartfelt gratitude to all those members and friends of All Souls Church who helped make that training possible.”

Tom Baehr was named All Souls’ choir director in 2015, after 14 years as a church member and as a tenor in the choir.  With bachelor’s and master’s degrees in music, his background includes experience asa public school music teacher, composer and arranger and music festival coordinator.  He directs the Guilford Chamber Singers and sings with the Blanche Moyse Choral and Illuminati Vocal Arts Ensemble.

Eva Frank Greene has been All Souls’ pianist since 2007.  Eva studied piano performance with Abraham Stokman (Music Institute of Chicago). After college, she taught music in Israel for six years; on return to the States, she taught at Sidwell Friends School and the Levine School in Washington, D.C. Eva and her family moved to Vermont in 2007.