As told in September 2020 to Christina Gibbons

As a boy in the 1970s, Dion LaShay lived in an apartment at Dalem’s Chalet,

right across the street from the church driveway.  He saw the big sign at the bottom of the hill and wondered about the building at the top.  Little did he know how important that place would become to him.  He started attending in his early 20s.

Right now during the pandemic, he is missing the building a lot – the art work in the foyer, the new floor and comfy chairs in the sanctuary,  the music, the company of friends.  He loves the image of the altar that shows up behind George Carvill’s face on Zoom. 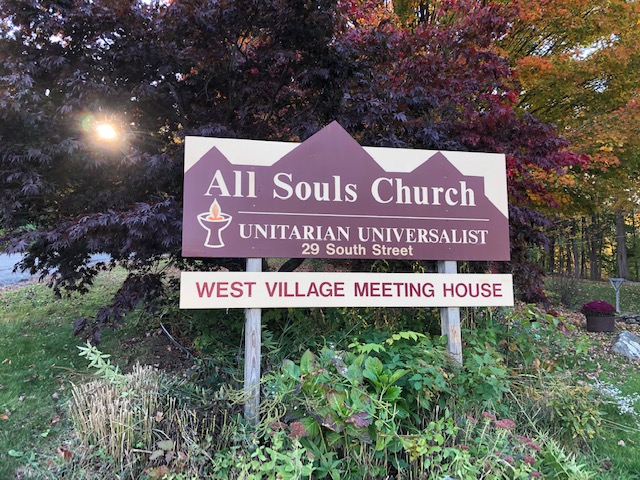 Dion signed the book in 1996, but moved to Bennington a few years later.  At that time, he joined the Church of the Larger Fellowship, a virtual UU church.  He is still active with that group, attending services on Sunday nights and group meetings on Wednesdays.  But he loves All Souls, feeling an irresistible, magnetic pull which drew him across Route 9 even in winter.  He thinks Zoom has been a great help staying in touch and thinks it would be a good idea to offer it as an alternative to in person services even after the pandemic ends.  He looks forward to the time when he can see his friends, interact with the new minister, see the chalice lighted, and celebrate our seven principles and purposes in person.  The mysterious building on the hill has become an important world for Dion.